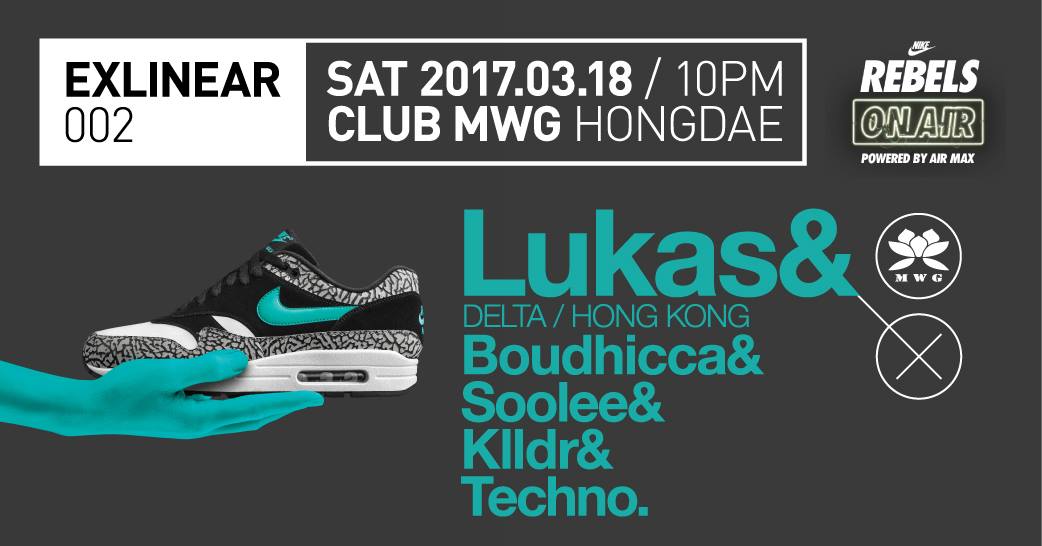 Exlinear is a new party format introduced by KLLDR, the new Techno alter ego of Tobias Kalleder, resident DJ and music director at Platoon Seoul. This time he’s getting together his friends, Hong Kong based DELTA sounds founder Lukas, Seoul techno veteran Soolee from more than less label and the Busan based techno DJane and promoter Boudhicca aka Trippy both part of the newly formed dj live hybrid crew domenta. Uncompromising & bold underground techno plus minimum set times of 2 hours to give each DJ enough time to take the audience on a journey into sound are the main focus of this event series. This one is just the second in the series, expect more and bigger stuff to come up this year!

Lukas is the founder of DELTA Sounds and co-founder of Hong Kong events organization PUSH, having brought the highest quality techno events and international guests to the city since 2009. Having launched the events brand DELTA in Europe, played at Berlin’s Griessmühle, warmed up for Âme and closed for Ben Klock all in 2014, played at YinYang Festival on the Great Wall of China, One Love Festival in Shenzhen and Midi Electronic Festival across China, it became time to get set for the next years is set to be like no other. In 2016 Lukas brought his brand DELTA back to it’s original home of Hong Kong having hosted events with international artists’ Truncate, Peter Van Hoesen, Scuba and Agoria in Hong Kong in Shanghai, Ø [Phase], hosted club nights at ‘Celia’ Shanghai and ‘TAG.’ Chengdu, and played at infamous underground institutions ‘Korner’ Taipei and ‘Watergate’ Berlin’s ‘Waterfloor’ to kick off 2017. Lukas’ over the past 7 years has also played supporting slots featuring international guests such as, Dixon, Molly, François X, Timo Maas, M.A.N.D.Y., Dave Clarke, Dirt Crew, Redshape, Recondite, Antigone, Ralf Kollmann, Anja Schneider, Re:You,Rodriguez Jr to name just a few and artists from top Berlin institutions Berghain with residents Marcel Fengler, Boris, Function, Answer Code Request and Tobias., and Watergate with Ruede Hagelstein, Matthias Meyer and Stassy &amp; Wilck. Lukas’ sets take a direction that follow from his grassroots influences, focusing on deep dark techno, taking the crowd through a set of rolling waves up and down through driving kick drums, Acid synths and melodic rhythms with always an unexpected surprise right down the middle, the floor won’t be left disappointed. Don’t forget your free hug down the front. X