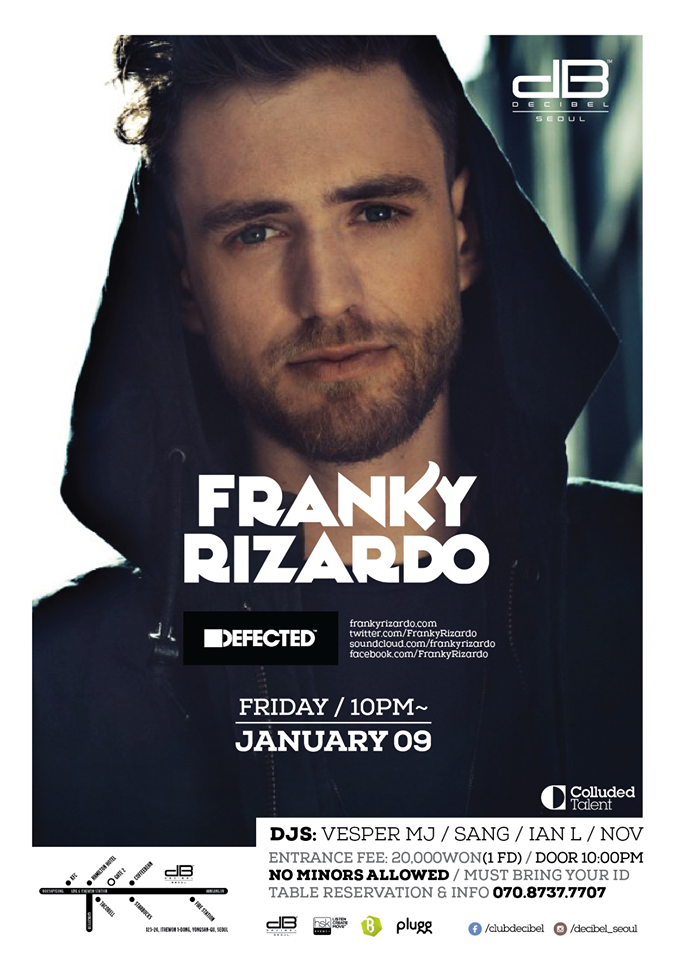 Register on the guest list and the entrance fee will be 10,000 KRW (1Free Drink) until midnight
http://bit.ly/13MvKzh

FRANKY RIZARDO BIOGRAPHY
“It’s not easy to describe my sound. This is because I play a large spectrum of the house genre, as long as it fits into one set. I do have a big focus on drums and percussion throughout my sets and productions. So if I had to try to put it into a genre, it’s groovy Latin house with lots of vibe!” – Franky Rizardo Few could have predicted the way in which Dutch house blew up in recent years. It’s now undeniably one of the biggest currencies in global dance music, with everyone from hip-hop megastars to the reggaeton community embracing its chunky, syncopated style in some way, shape or form. You’ve heard about your Jacks and your Lukes; now it’s time for one Franky Rizardo to step into the spotlight. Serendipitously born during the second summer of love – acid house’s take-off year, 1988 – Franky gorged himself on Holland’s burgeoning dance music scene from an early age. Daft Punk’s groundbreaking Homework was the first album he ever bought, and by the age of 14 he was DJing and creating music of his own. His newfound obsession soon blossomed into something bigger than just a bedroom hobby, with a residency at renowned Dutch club Manhattan soon following and marking the start of his professional career.

Pouring all his efforts into DJing and producing and honing his percussive, high-impact take of house music, he soon found himself playing across France, Switzerland, Germany and Spain. His production career soon began to find wings, with the young talent developing his style through techy and minimal moments while never looking focus of the key musical themes that he continues to represent today. He’s been in cahoots with most of his home country’s biggest stars for years now – collaborating with Hardwell on one of his earliest releases in 2006, remixing ascending hotshots Baggi Begovic and Sidney Samson in 2008, and since providing reworkings for Erick E, Sander Van Doorn, Fedde Le Grand and working alongside Bart B More. While not yet as famed as these big names, he’s been a key proponent of the Dutch house sound and an integral part of the scene since it became big news – and well before that point too.

His sound focuses on tribal rhythms, big Latin percussion, nagging little riffs and proper house music vocals; a resolutely peak-time, big-room proposition that’s bursting with flavour, colour and energy. Music for wallflowers, this is not – but by the same token, it’s not as ‘banging’ or mindless as some of the not-too-distant sounds his fellow countrymen are churning out. A perfect balance of soul and thump, if you will. Rizardo’s not looking for mainstream success for the sake of it, however, as some essential be-all-and-end-all. He’s aiming for the club – not the charts. If crossover success comes his way, he’ll take it in his stride – but it’s not a concern for him. That’s not to say he’s not elated, proud and in admiration of what his colleagues in the scene have achieved, though.

“I really respect the way some of the big Dutch DJs are storming into the charts with big artists from the US” he reveals. “This opens doors for all kinds of house music in the world. When you are a producer and your track gets picked up by the big crowds, it’s a very big compliment. Everybody has different motives and objectives in their life and career. It isn’t my main objective to storm the charts though. I produce what I like and feel, and if that gets picked up by the radio stations or hits the mainstream crowd than that’s an amazing honour!” As a DJ, his aspirations are simply to give it his all and to stand out in an ever-more-crowded market of jocks. “This can be achieved by putting a lot of time in searching and playing unique records” he reckons. “This has stuck throughout my career because I am still always looking for special records or acapellas to make my DJ sets more interesting and to surprise the crowds.” As well as his blisteringly hot, fresh-out-the-studio productions, his sets are also littered with his own exclusive edits of other producer’s tracks – which he chops, changes and rearranges to achieve maximum dancefloor potency. He’s nothing short of ambitious when it comes to the scale of his sets, saying he wants to “play 10-hour-long legendary DJ sets that people will remember for the rest of their life!”

Since 2010, he’s been closely linked with Defected – the world’s biggest and most influential house music label – providing remixes for them of hot names including DJ Gregory, Studio Apartment, Copyright, Michael Gray and Danism. Now a fully-fledged member of the family, he’s got their full backing – and that’s not something they ever give lightly. Clearly, they see something pretty special in him. “When I started playing and buying records, I was always very impressed with the Defected vinyls. I’m very happy to be part of the Defected label today as it has been my dream label from the start!” Keep your eyes and ears peeled for plenty more big news to come from this fledgling partnership. House music is doing seriously big things right now, but when the commercial bubble finally bursts, it’s people like Franky Rizardo who will remain strong and devout to the scene. “I hope to spread the sound of quality house music” he says. It’s clear he’s got his heart in it and that he’s in it for the right reasons – and in this day and age of laptop DJs and formulaic producers, we need more talents like him.