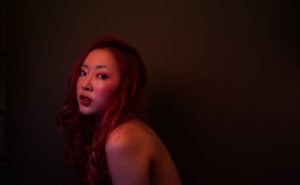 Nice to see you again! When was the last time you came to Korea to play a set?
It’s good to see you again too. It’s been about 2~3 years. I think my last set in Korea was at MWG.

You played at Seoul and Busan right? How was Busan for you?
It was fun to play the music. But I guess since the scene in Busan is not that big, the conditions weren’t the best.

And you came back to Seoul and played at Contra. Was that your first time at Contra? How was it?
Yes it was my first time at Contra. The sound system was great and the staffs were also very professional. The back to back session with the German DJ Tobias was also really fun. The only thing was that I notice the crowds are always spread out at clubs like Contra that have a separate smoking zone.

I’m curious about how you prepare your sets before playing them. All DJs have a bit different ways of doing it.
I almost always pick out songs spontaneously as I’m playing the set. So beforehand, I need to have my music libraries completely memorized in my head. I have to listen to the tracks until I get sick of them. When I’m confident that I know all my tracks, I also become confident in DJing.

But even if you pick songs as you play the set, are there tracks that you play often? It’d also be great if you can recommend us your go-to closing track.
It’s hard to choose one because I play such a wide range of music. Basically I put my focus on tracks that give off trippy vibes that make you feel like you’re transporting to another dimension and play anything between minimal to techno depending on the venue, the time and the energy.

If I have to pick, tracks by Ron Costa are my go-to. All songs by him are the so-called ‘working tracks’. His tracks are in the borderline between techno and tech house that’s not too cheesy. As for the closing track, I try to put on something that isn’t techno or house because I just think it’s boring if the last song is also a danceable track. I play Blind Man by Nominee fairly often. It’s dubstep but it’s not too hard to mix with techno, gives off that ending-song feel and explains my idea/concept of dancing very well.

You’ve recently released an EP through that label.
It was my first EP released through my label, so I really wanted to show everything. Based on trippy and deep sounds, I tried to make it as diverse as I can. I used jazz samples in ‘Space Jazz’ and African music samples in ‘To My Rimbaud’. I put in a lot of effort to make tracks that are minimalistic and also organic.


We follow your social media account, and we’ve seen many supportive postings of San Proper. He is also very loved by many.
I’ve always wanted to work with DJs from the Rush Hour label. Among them, San Proper definitely is something – he even got a tattoo of SOV. He’s very supportive of us. To exaggerate a bit it’s like working with our own idol.

You also often play vinyl sets. How do you find your records?
I don’t really go to record shops. To be exact I don’t go to a record shop to buy vinyls. I just go as if I’m on a walk, having fun. I’m not very good at listening to a track briefly and buying it right away. But instead, I usually order them online, branching out from my favourite labels.

Could I ask you why you’re based in Berlin even though you were born in Korea?
When I left Asia 10 years ago, there were a lot of limitations in the scene. I used to go back and forth between Seoul and Tokyo but the scene didn’t have enough support and I thought there must be a huge gap between the scene in Asia and that of the world. Back then, the social media also was not as developed as it is now. Since then I went to England, and then settled down in Berlin. I was very lucky enough to have a friend who helped me start playing music right away.

If you could give an advice to someone who just started DJing, what would it be?
You would have to go out clubbing a lot. You would have to go to various clubs and listen to different music. It’d be advisable to start DJing when you actually know that you like this music and culture enough. It’s a bit boring of an advice.

I totally agree. If I could add onto that, I would advise them to enjoy the club from the very beginning to the very end. Everyone thinks that the ‘peak’ is the most important. I agree that’s when it’s the most fun, but if you want to become a DJ with a full understanding of a party, it’s important to feel the whole flow of one night.

Is there a recent night that you especially remember?
I went to Turkey with a Japanese DJ friend named Anri. Everything was so unstable and unsure before the set that I even got the plane ticket the night before the play. When we got to the club, the timetable wasn’t even ready. So we ended up playing 4 hours each, total of 8 hours, without a warm-up DJ. I was a bit taken aback at first, but when I started playing, it was actually really fun making a storyline starting from the deeper tracks and bringing those into techno. I played whatever I wanted like hard techno. By the way it was at a club called 1888 in Izmir. The building was built in 1888.

Lastly, could we finish off this interview by briefly talking about your jinx if you have one??
Whenever I play a set I love, I forget to record it.

It was very nice talking to you today. I hope to see you again in Seoul soon! G