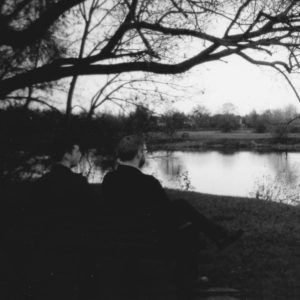 “I was introduced to House and Techno, mainly minimal music by friends when I was around 15/16, I started going out in London around this time seeing DJʼs like Ricardo Villalobos and Sven Vath and got instantly hooked, Iʼve been on a never-ending path of discovery ever since in terms of finding music and DJing“.

Likewise, thanks so much for having us. Weʼre Yard One / Tryst, a collaborative project between myself (Jordan Bruce) and, Larry Jones, the Tryst project also features my wife Enhua. Yard One focuses on Deep House, Minimal and some Techno and weʼve been releasing material for a few years now, predominantly on our own Tact Recordings / Tactics labels but also on labels like Unclear Records, Sound Of Vast and more. Tryst employs a more Ambient and Dub Techno aesthetic and the debut project ‘Isshoʼ was released last year on Apparel Tr

It seems that youʼre managing several businesses-DJ, producer, director, caring Cinthie. How do you keep your balance between them?

Yeah everything seemed to become connected over time and now I have plenty to keep me busy in terms of involvement in the electronic music scene. For me the artists and labels I work with from a promotion aspect will always take priority over what I do personally as a producer or DJ. Making music is something Iʼve always done in my spare time and over the years Iʼve started to make material Iʼm happy to share with the world, weʼve managed to achieve a lot over this time but in terms of a balance my own career takes up a small portion of my daily life.

How did you get into music(DJ/producing)?

I was introduced to House and Techno, mainly minimal music by friends when I was around 15/16, I started going out in London around this time seeing DJʼs like Ricardo Villalobos and Sven Vath and got instantly hooked, Iʼve been on a never-ending path of discovery ever since in terms of finding music and DJing. The production side of things came shortly after when I bought Logic Pro, Iʼve worked under various aliases over the past ten years but the most recent output as Yard One and Tryst is the stuff Iʼm most proud of.

Who the most inspired you to become a musician?

Iʼm not sure I could pinpoint one person in particular, I think I followed more of a style and a crew of people as inspiration, the Dial Records crew like Lawrence, John Roberts and Efdemin have always been a huge inspiration for me musically, and also the Smallville crew like Christopher Rau, Smallpeople, Julius Steinhoff and STL. This kind of Deep House, Dub Techno and Minimal style was what drove me to start working on my own music.

For the Yard One project I guess our music always has some deep elements, we like our music to take you on a trip, so ethereal, evolving pads, modulating frequencies and underlying atmospherics are often present but we also love dance floor music so a dusty raw drum groove is always there to keep things moving. For Tryst, every track starts with a field recording taken from somewhere in the world, the debut ‘Isshoʼ was based around recordings me and my wife took in Tokyo and Kyoto, Japan on our honeymoon, this project is more ambient leaning for sure and it actually just surpassed a million streams on Spotify (link)  which was pretty amazing for us to see since this was just something we made as a memory for ourselves to look back on.

Can you explain your latest release?

The last thing we did was a cassette tape release on Scaffolder Recordings, a label from Osaka, Japan. It was a split between both production names Yard x Tryst and was called the ‘Sonic Excursions Tapeʼ (link), all of them were based around field recordings again and it runs like a call and response bouncing between the two different styles, some groovy electronica stuff as Yard One and some meditative sounds as Tryst. Iʼd really love to have the opportunity to play all night long some time soon and explore both aliases, start the night with Trystʼs ambient sounds and gradually move towards more upfront dance floor stuff.

Can you explain this mix?

The mix stands as a pretty good representation of what weʼre doing both musically and DJ wise at the moment, weʼve weaved in many of our own productions amongst a dynamically evolving array of emotive deep house, gritty techno and dubbed out sounds.

Where do you get all the inspiration?

I think the majority of inspiration comes from listening to other peoples music really, Iʼm listening all day, buying records every month, constantly checking out other artists mixes and seeing whatʼs new, but thereʼs also the daily inspiration from people you meet and talk with, things you see, travel is of course a huge part of the inspiration for Tryst since the recordings make the framework for the music.

What is you favorite record?

Smallville are still my favourites such as John Robertsʼ ‘Glass Eightsʼ, Efdeminʼs self-titled debut and Move D & Benjamin Brunnʼs ‘Songs From The Beehiveʼ.

Have any plan to have some gigs in Seoul in the future?

We would really love to, my wife is actually Korean so weʼre hoping to come and visit some family who are living in Seoul this year, if any opportunities came up to play it would be a dream come true, Iʼd love to explore the local scene and have the opportunity to share our passion with the people involved in it. It seems like things have really picked up in the city in recent years.

What is your plan near the future?

We have a few Yard One trackʼs ready to release, weʼre just working out whats working together and setting up the next two EPʼs. For Tryst, we just took a little trip to Sardinia, Italy and made a bunch of new recordings so weʼre currently working on the next project around those so plenty of stuff in the pipeline for those who are interested. thanks again for having us and we hope you enjoy the mix.
Brought to you by Golmokgil – Underground music in Seoul, South Korea
서울의 언더그라운드 음악을 여러분에게 소개합니다. – 골목길