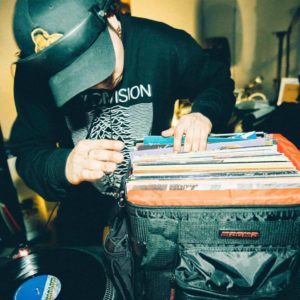 “I remember every single ‘record’ of buying my records whether that be from a record shop or from an individual seller. What the weather was like that day, how I was feeling and what I was thinking on my way home, what I felt after listening to it for the first time… I had gone to buy a record but looking back at it now, I bought part of that whole day”.

Have you been enjoying working at Rm360?
Enjoying is an understatement. One of the small goals I’ve had since I was a kid was to work at a record shop, doing record-related work. As I turned 20, I’d always checked to see if any of the record shops that I used to go to are hiring. I didn’t care if they paid me with CDs or LPs, but none of the shops were hiring. Rm360 is one of the record shops that I used to go to as a customer after I had finished my military service about four years ago and back then, I had never imagined that I would ever work here. So all of that makes working here that much more enjoyable.

Have you thought of opening one of your own?
Yes I have. It’s just that I don’t know enough about the distributive network. And especially so because I only sell the records that Soulscape brings to the store here at Rm360. He usually brings records in mint condition, so it would not be easy to equip with records that can compete with those.

If a guy in a t-shirt and flip flops walks into the store and asks for “a record that can brighten up the mood on a hot day”, what would you recommend?
I would want to recommend a relatively lighter soulful music like “New Birth – California Bound”. Music that’s bright, like city pop, is quite trendy right now so a lot of people have been looking for this. Plus it is relatively cheaper. Because it is an album by New Birth, I’d imagined it to be Breaks or Disco but it wasn’t, so I actually sold it for 5000 won a while ago.

Do you have a certain algorithm or system for comprehending music? A genre or any kind of feel you get or instruments?
I usually imagine the image of the city in which the music was made. Chances are, the producer would probably be from the same city and influenced by the image of that city when making the music. And then I mix that music, with a city near me that has a similar vibe. I identify the music a lot better when two cities that are far away from each other have matching images. For example, the area that my studio is located in is planned to be redeveloped so it is pretty ghetto. So whenever I pass by here, I take the image of this area with something like 90’s East coast hip-hop. Sounds complicated, right? But it’s fun.

What got you into music? Especially records?
If I were to pinpoint to a specific year, it would be 2008, so exactly 10 years ago. That’s when I started collecting CDs. When I really didn’t want to study in my sophomore year of highschool I read the book “Hip-hop, the Classic of Our Generation” by chance and started listening to all kinds of hip-hop. Then I started to wonder about the credits, and that led me into buying CDs. I didn’t know why that was good or why that was a classic, but I just decided to buy everything that was mentioned in that book and listen to them. So whenever I made money I made it out all the way out to Seoul from where I lived then, which was in Gyeonggido. I used to go to Hyang Music in Sinchon, Purple Records in Hongdae and Hot Tracks in Gwanghwamoon to buy CDs for three years.

Among them, Purple Records played a big role. Usual record stores generally carried records with domestic license. And I didn’t really like the ones with bad introduction in Korean or with one of those ‘recommended by celebrities’ stickers. So I only looked for American records and Purpld had a lot of imported ones, so it was perfect for buying hip-hop records. They also had a lot of secondhand records for cheap prices.

It’s  too bad that some of those shops have closed down.
The CDs I bought then made the foundation of the record library that I currently have. The producers of the albums that I used buy back then played a big part. The producers that I was into, like Just Blaze, Kanye West and Madlib all used to take samples from records to create new sounds.

Then how did you go from CDs to records?
I was getting interested in finding the original vinyls that were used for sampling in hip-hop and that winter the first Seoul Record Fair was held at Platoon. It was quite a historical moment for me. Just when I was interested in new formats, the biggest record fair in Seoul. I worked really hard the week prior, to earn money for the fair. But then when I actually got to the fair, I panicked. I was pretty confident with the knowledge I’d gained from digging CDs but that was all useless at a record fair. I didn’t know which ones were good and what I was supposed to buy.

After I finished my military service, Sete Records that was in Heukseok-dong relocated to Hongdae, Gimbab Records opened in Donggyo-dong and I got to know Rm 360 by chance. I would go to these three places religiously like I used to when I was into CDs and after a year I realized I’d collected about a thousand of them. Then I came to develop my own taste and a know-how to finding records that I like and a know-how to digging deeper into music, which all led to the current archive. So I think I could get into music to the extent that I did, because of those awesome record shops in Seoul.

People usually remember the very first record they bought. Which one was it?
A 015B album with the song “Goodbye Now”, “Can’t Slow Down” (1983) by Lionel Richie and a classic record, so a total of three. I didn’t know anything then and I bought them for about 5000 won each at a record fair.

Some people who like records say that to like “records” as a medium is to enjoy the whole process of buying them and taking care of them. So it is a bit different concept from mp3 being a convenient, cheap and “economic” medium. Do you agree?
I do agree very much. I think a lot of people who deal with records would agree. I remember every single ‘record’ of buying my records whether that be from a record shop or from an individual seller. What the weather was like that day, how I was feeling and what I was thinking on my way home, what I felt after listening to it for the first time… I had gone to buy a record but looking back at it now, I bought part of that whole day.

You must be proud when you look at your record shelf. It’s like a big album of your life. It is priceless compared to your pictures on your social media account.
It feels strange to look at the shelf filled with records because it feels like my life has been layered into a big pile. I do like, and often use mp3 formats (in fact I still use mp3 player), but since it doesn’t require any kind of special process, it doesn’t have that deep something that records can offer. When there’s something wrong with a mp3 file, you can just re-download it. But when a new record is bent or has bad noises, you would actually need to put in physical effort to fix it. I also like the process like this that can be of high maintenance.

If you listen to records a lot, it wouldn’t be so weird for you to have the desire to compose and sample music.
For sure. I started buying records to sample in the first place. When I buy records, I usually categorize them into three – one that can be a source for music, one for listening, one for playing at events. Right now I have a plenty of records that I use as a source for music, so I plan on refining and polishing the music a bit more and releasing it.

I see that you DJ at The Edge in Euljiro and at Pistil in Itaewon from time to time. Do you enjoy that as well?
Of course. I think the biggest reason is because I can put in the effort to select music that I and other people can enjoy, all considering the time and place as well. There is a point where I really focus after realizing that there really is a big difference between listening to music alone in my room and playing music where there are a lot of people.

Where does No I’m Not stand as a DJ in this scene?
I would want to say that I take on the position of a DJ who is based on record shops, which there aren’t a lot of in Korea. But I can’t be sure whether I am included in this area where we call ‘the scene’. It’s not like I DJ regularly.

What kind of concept does this Golmokgil mixtape have? Which songs did you include? Please explain freely.
It’s a long select mix of 80’s soul and soft-rock. These songs aren’t very rare or special but I put together some of the modern points of the 80’s, which I’ve been enjoying these past two years. I recommend you to listen to it while you’re walking in the June weather

Last question. I think we can really imagine this now. Let’s say the two Koreas are reunited and you have to chance to play your music for North Koreans. You think of key words like freedom, love, and peace. Which song would you play for them?
“Mandoki & Eavn Sun – Korea”